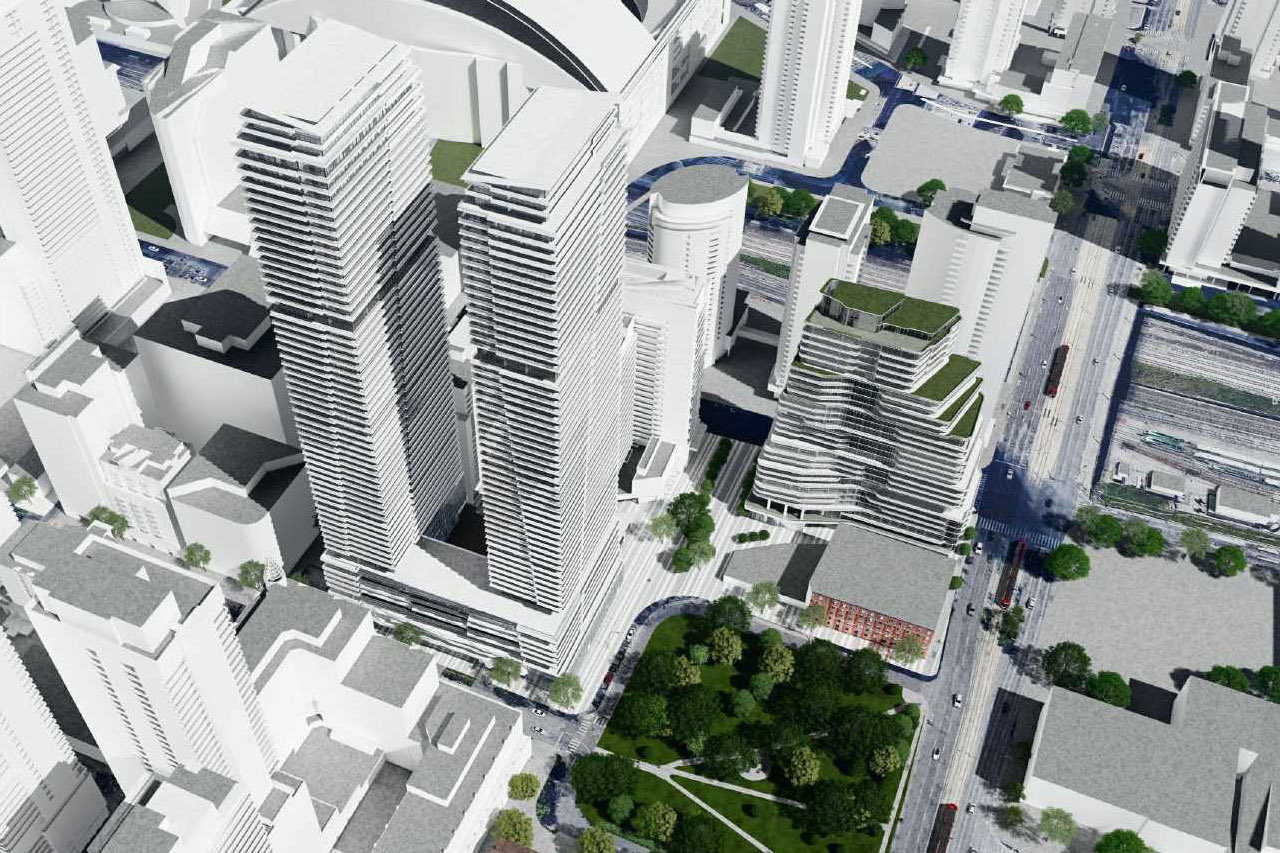 The site is a bowtie-shaped lot at the northeast corner of Front and Spadina, currently used as surface parking, the largest remaining surface lots in the King-Spadina area. Across Spadina Avenue on the west side, on grounds formerly home to the Globe and Mail headquarters, is The Well, an entire neighbourhood undergoing construction that, when completed, will host three million square feet of retail, office and residential space. 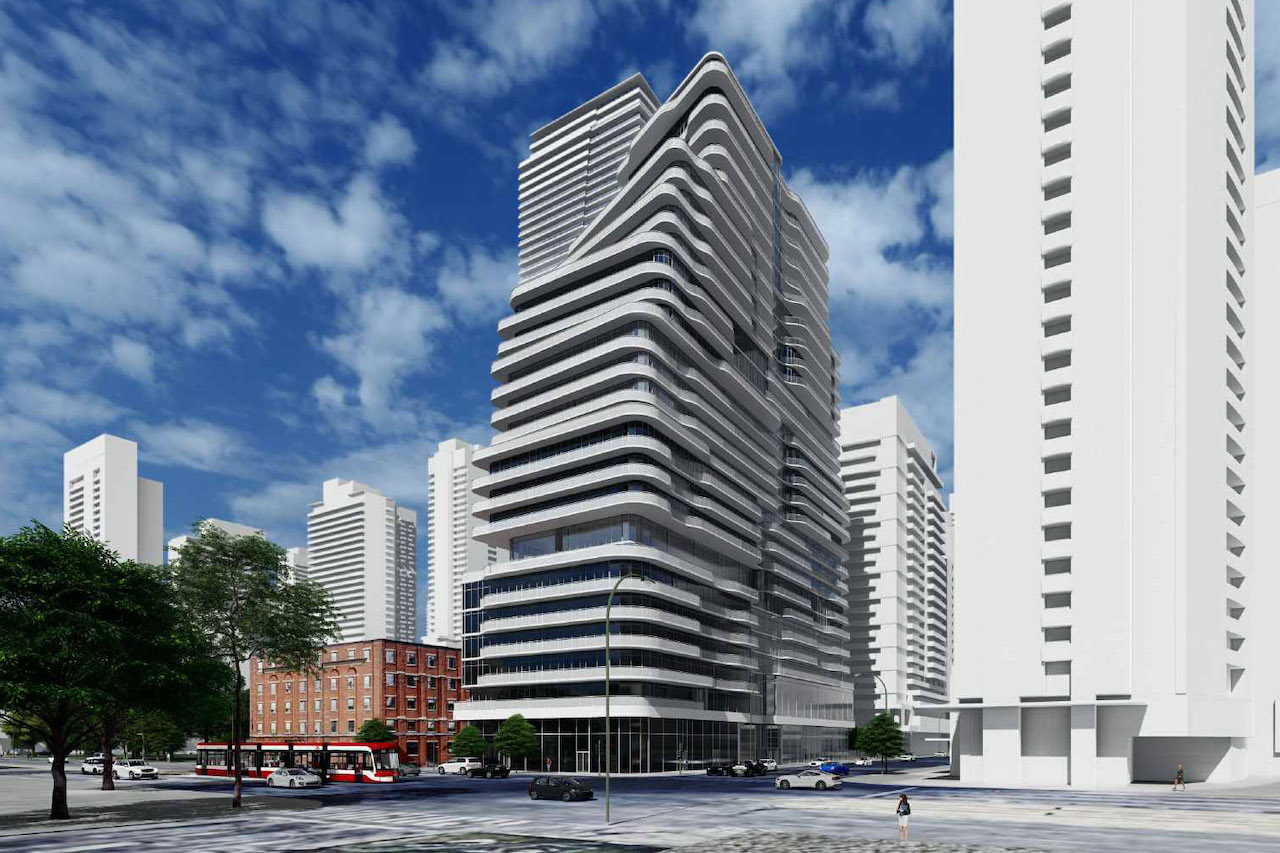 The new plan for 400 Front—designed by Kirkor Architects—proposes two towers of 61 and 63 storeys on the north parcel and one tower of 28 storeys on the south parcel. It brings a combined 2,226 condominium units along with significant retail across the site. A quick history of the site: the City failed to respond to the originally envisioned ZBA application—a 4-tower scheme with 2,300 housing units designed by architectsAlliance—within the prescribed time. The developers appealed to the OMB, resubmitted plans in 2018 drawn up by Kirkor Architects, and a decision by the renamed LPAT eventually laid out conditions for approval. 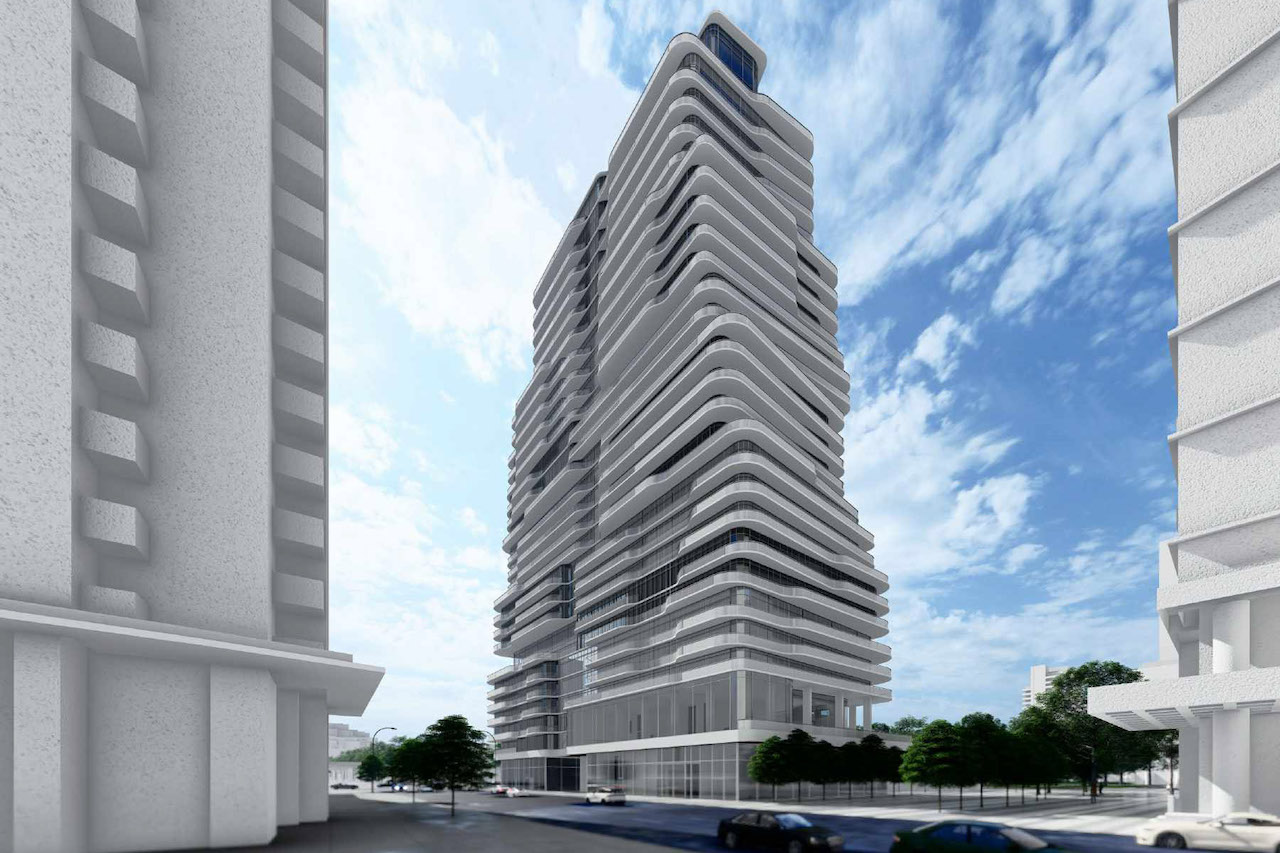 The ground floor of Tower A (28-storeys, seen above) on Front Street boasts largely retail space, with the residential lobby off Front, tucked adjacent to the driveway into the site. Residential units make up the remaining floors, with a double height indoor amenity area occupying half of the second level, and the rooftop level. The step-backs of the building’s glazed, sculpted form creates a series of terraces, forming green roofs as well as common outdoor amenity spaces, while reducing shadows on Clarence Square Park to the north. 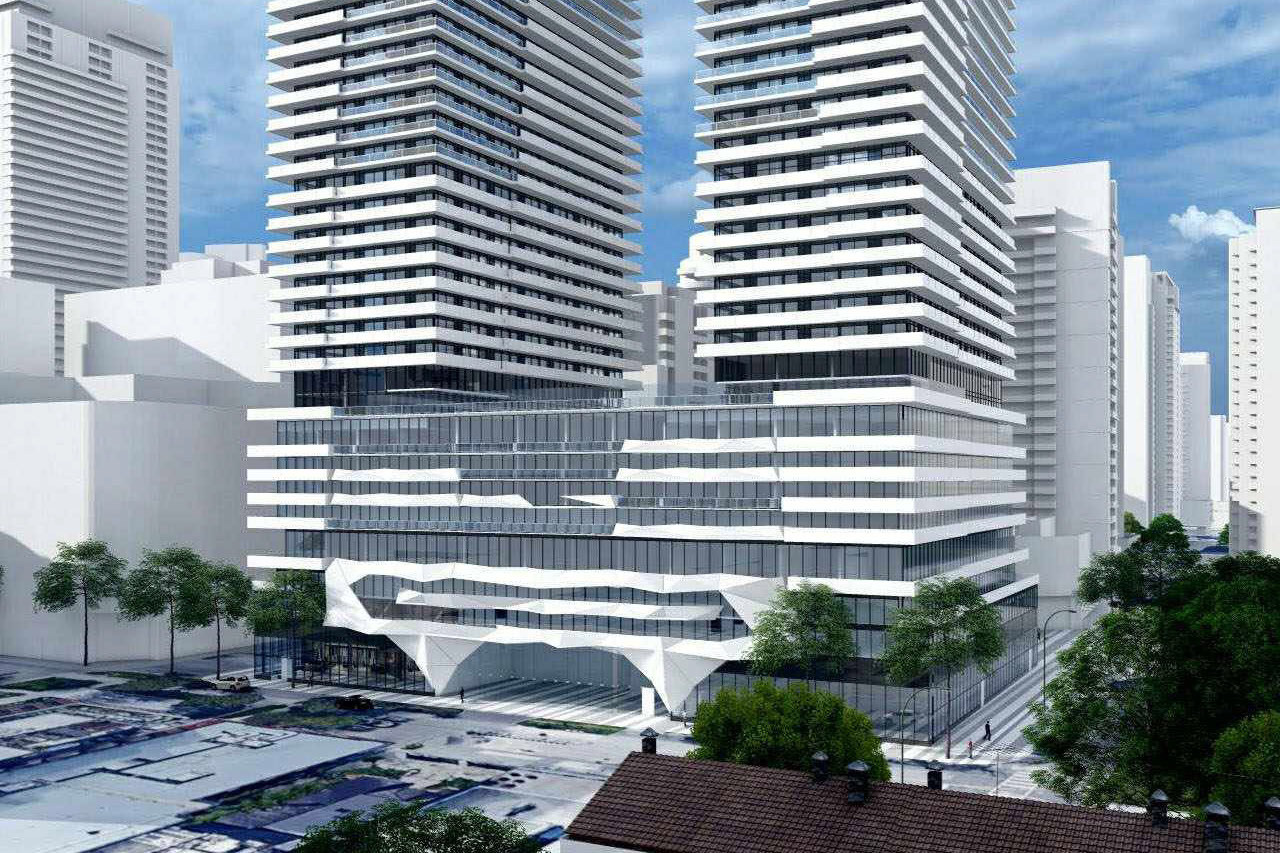 Podium of towers B and C. Rendering courtesy of Kirkor Architects.

Towers B (61 storeys) and C (63 storeys) which face Wellington Street, will share a podium with an overall height of 9 storeys, including retail components at grade, indoor and outdoor amenity spaces on the second through fourth levels, and a 6-storey residential component above. The 2-storey grade-related component will consist of glass panel variations, creating a transparent base with high-visibility commercial uses to animate the pedestrian environment on the surrounding public streets and along the internal laneway system within the site itself. These two taller towers on Wellington would rise to heights of 194.05 and 201.05 metres. 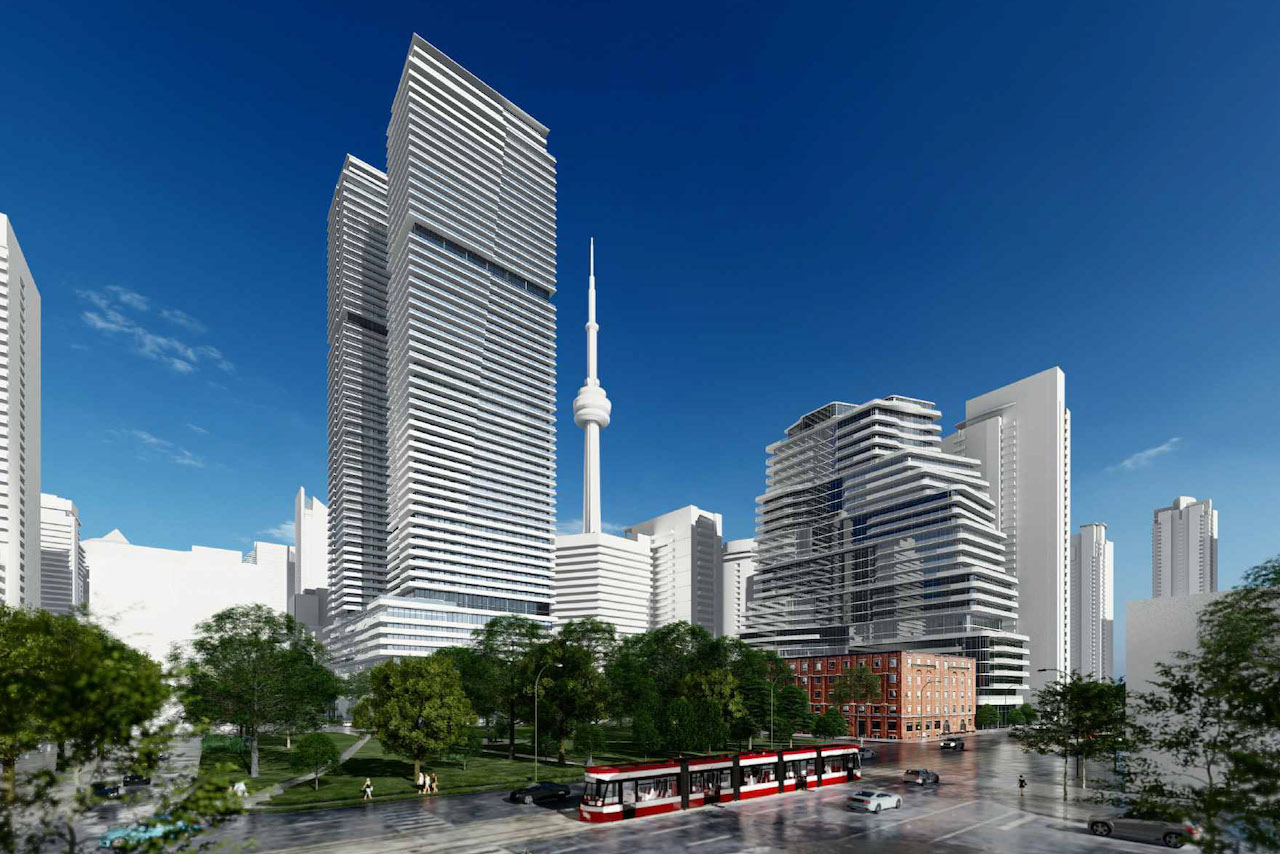 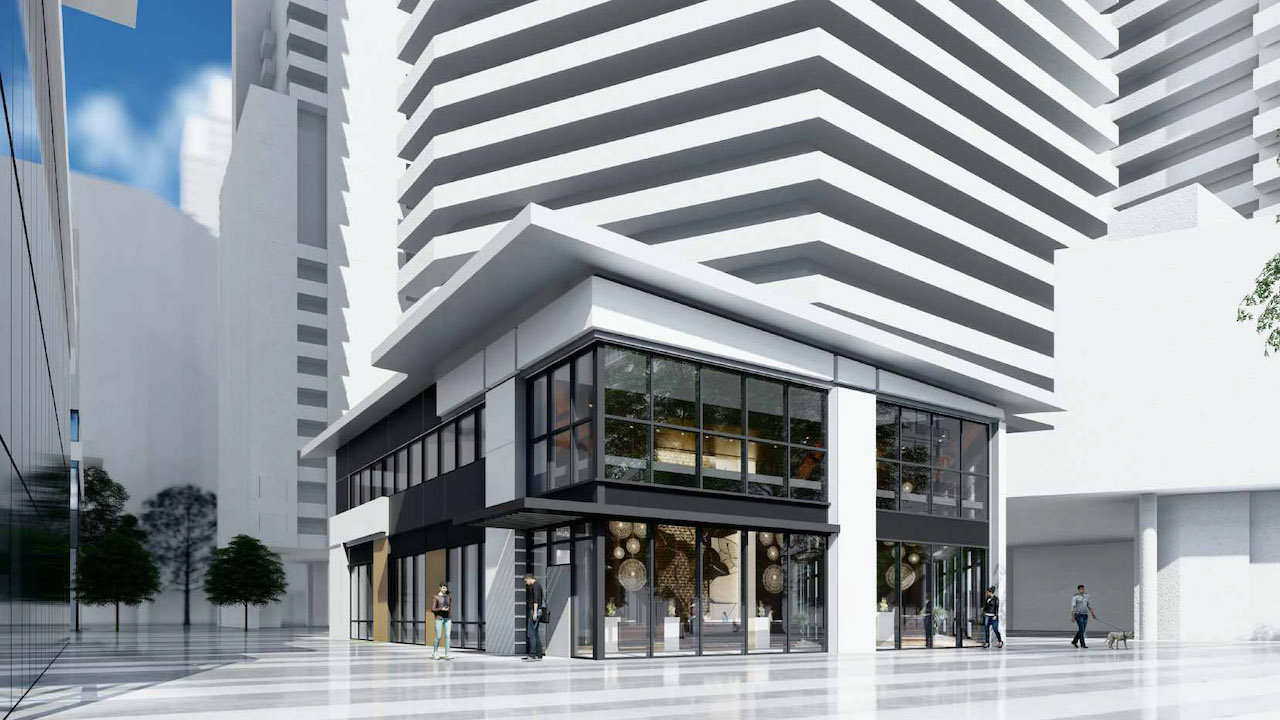 The Planning Rationale for the site suggests that the redevelopment of the site will help strengthen the role of the park as a multi-functional and multi-seasonal space, with the capacity for the programming of a range of uses, activated spaces and recreational activities. The development would include 665 parking spaces in three levels of underground garage and a total of 2,003 long-term bicycle spaces.