Medallion Corp Looks to Redevelop Valu-Mart on Bayview in Leaside

A mid-rise, mixed-use rental building is being proposed for Toronto’s Leaside neighbourhood at 1500 Bayview Avenue on the northwest corner with Davisville Avenue. The site currently houses a parking lot, a Valu-Mart, and a garden centre & greenhouse. In October, Toronto-based Medallion Corporation submitted Zoning By-law Amendment and Site Plan Control applications to City planners in order to redevelop the lands at 1466 and 1500 Bayview Avenue, to demolish the existing buildings and to construct a nine-storey mixed-use building. 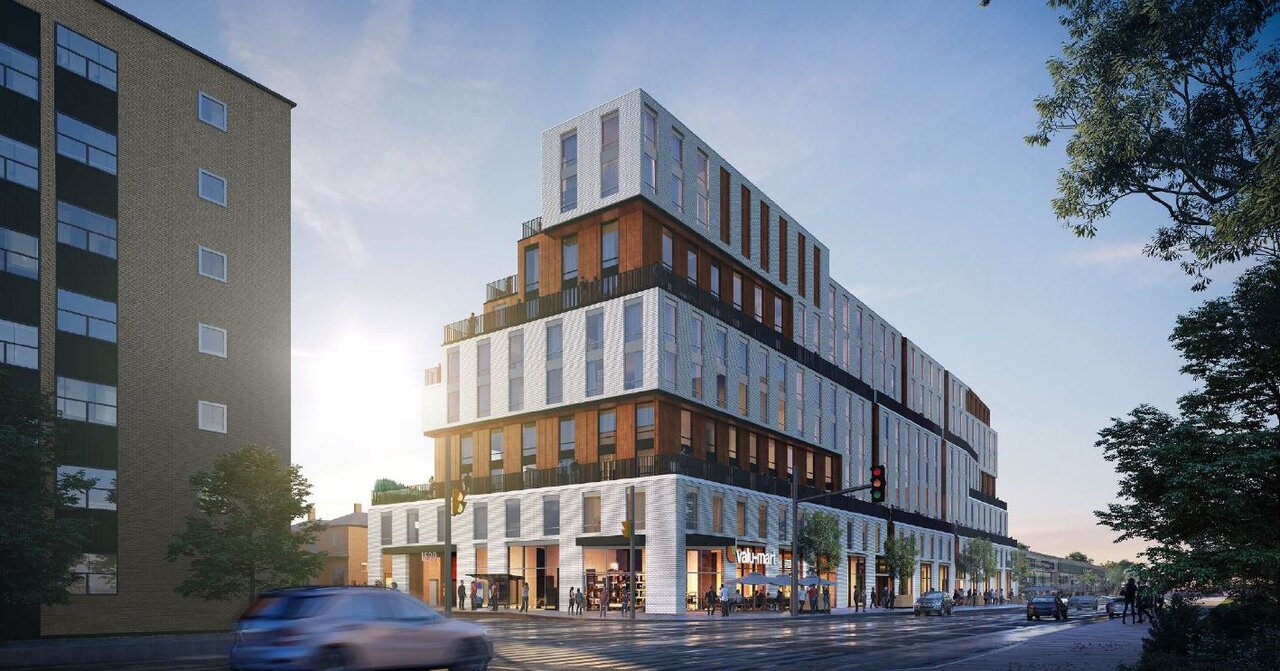 Looking northwest across Bayview Avenue to the building, image by BDP Quadrangle for Medallion Corporation

Designed by BDP Quadrangle, the proposed building houses 156 purpose-built rental residential units. The bulk of the first floor comprises retail space along Bayview Avenue, with a residential lobby located along Davisville Avenue. The total gross floor area is 14,942 m², including 1,659 m² of at-grade retail space, resulting in a total gross floor area of 4.31 times the area of the lot. Oblique aerial photo looking northwest, showing the context for 1500 Bayview, on the eastern edge of Davisville Village and the western edge of Leaside. Image courtesy of Bousfields Inc.

“Today, this part of Bayview Avenue is undergoing a transition from low-rise residential and commercial buildings towards an area that contains a broader mix of residential and employment uses as well as vibrant public spaces,” reads the planning rationale, written by Bousfields Inc.

East Elevation of the proposed development. Image by, BDP Quadrangle for Medallion Corporation

The long rectilinear building fronts onto Bayview Avenue. Above the ground floor are dwelling units, with indoor and outdoor amenity spaces on levels 2 and 8. The second floor generally maintains the same setbacks as the ground floor. From levels three through six, the building is stepped back an additional 1.5 metres from the Bayview property line, and then again, an additional 1.5 metres from the 7th floor to the roof. In addition to the step-backs, the built form includes horizontal and vertical articulation to further break up the mass of the building’s frontage and complement the streetscape.

From the rear, the building terraces away from the west property line, transitioning from low-rise residential neighbourhood to the west, generally in accordance with the 45-degree angular plane, but encroaching beyond it at higher levels as seen in the image below. South Elevation of the proposed development. Step-backs are also incorporated into the south and east elevation to delineate a street wall in accordance with the Secondary Plan directions. Image by BDP Quadrangle for Medallion Corporation

The rental dwelling unit mix comprises 89 one-bedroom units (57.1%), 52 two-bedroom units (33.3%), and 15 three-bedroom units (9.6%). All vehicular and loading facilities will be provided from a new rear laneway in order to maintain a continuous public realm along Bayview Avenue and further reinforce the main street character of the Avenue. A two-level underground garage, accessible by the laneway, provides 170 parking stalls and 145 long-term bicycle spaces.