On October 29, KingSett Capital submitted applications via 2316160 Ontario Inc. for an Official Plan Amendment (OPA) and Zoning By-law Amendment (ZBA) that would allow a 59-storey mostly residential tower to rise on an assembled site of 510 through 528 Yonge Street. The Quadrangle-designed tower would join a growing roster of similarly-sized buildings which are redefining the stretch of Yonge Street between College and Bloor, in an area which had until recently retained an historically low-rise character. 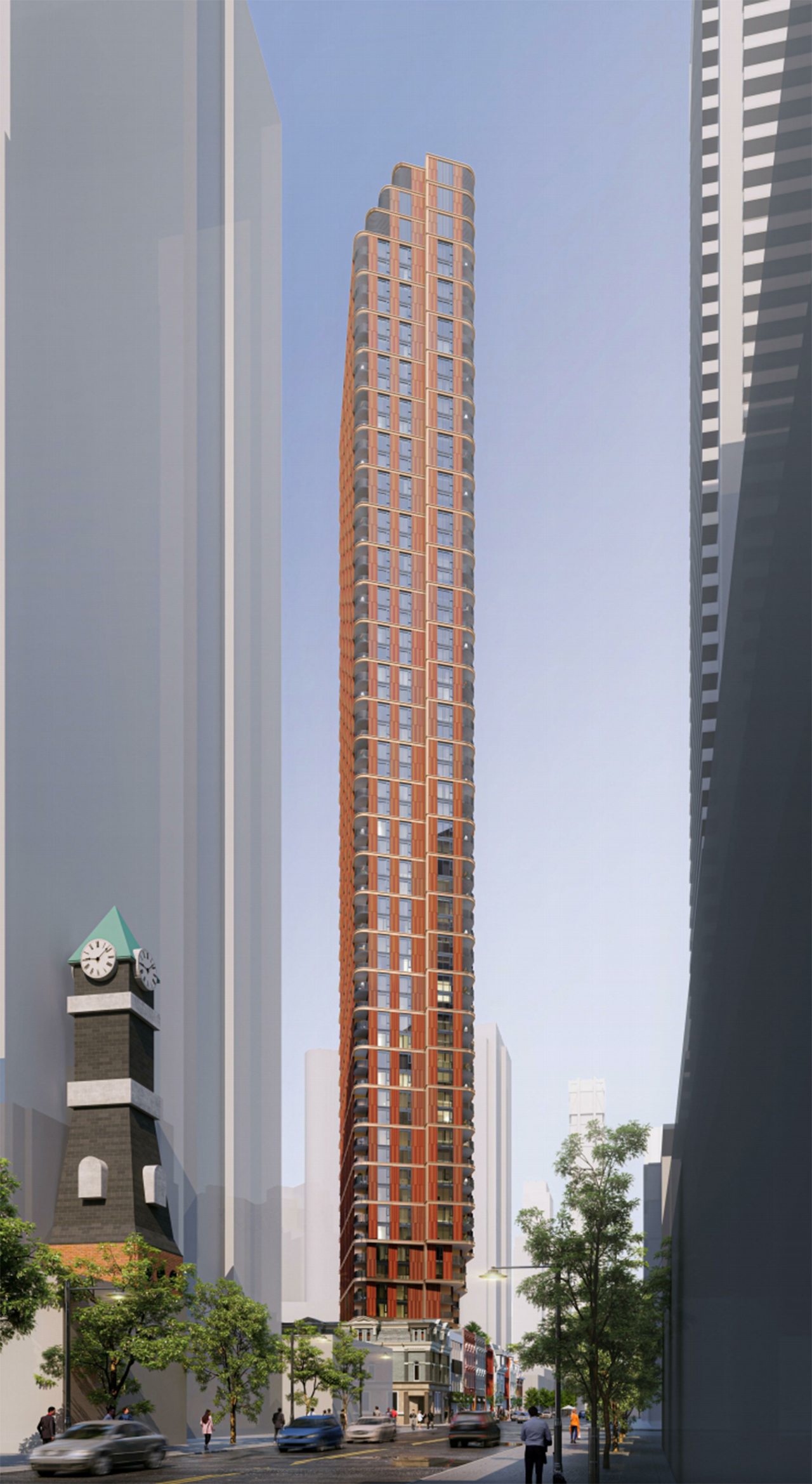 View looking north along Yonge Street, image via submission to the City of Toronto

Although detailed plans are not yet available, the proposal already stands out for its red-toned cladding, metal balcony railings, and a floor-plate which is rotated in relation to the street-grid.

The site sits in an area currently zoned for a maximum density of 3.0 floor space ratio. At 59 storeys and with 41,862.60 m² gross floor area (GFA), the proposal has a floor space index of 23.7, far exceeding the limit. This is fairly typical for development proposals in the area, all requesting amendments to the zoning for far in excess of what the existing by-laws allow. Such proposals generally align with the City and Province’s most recent policy statements which emphasize the need for densification and growth in areas that are well-served by transit, and therefore the proposals are typically approved, not necessarily at the height or density initially requested. A determining factor for final tall building heights is that they add new shadows to parks, and in fact the rotation of this building to the street grid is meant to minimize its shadow on a new park to the northwest across Breadalbane Street.

The development, which sits within a short walking distance between two subway stations, therefore proposes to bring another 500 condominium units to the neighbourhood in a mix of 280 one-bedrooms, 170 two-bedrooms, and 50 three or more bedrooms. It also proposes 519.5 m² of retail space as well as a 464.5 m² for a “community hub.” 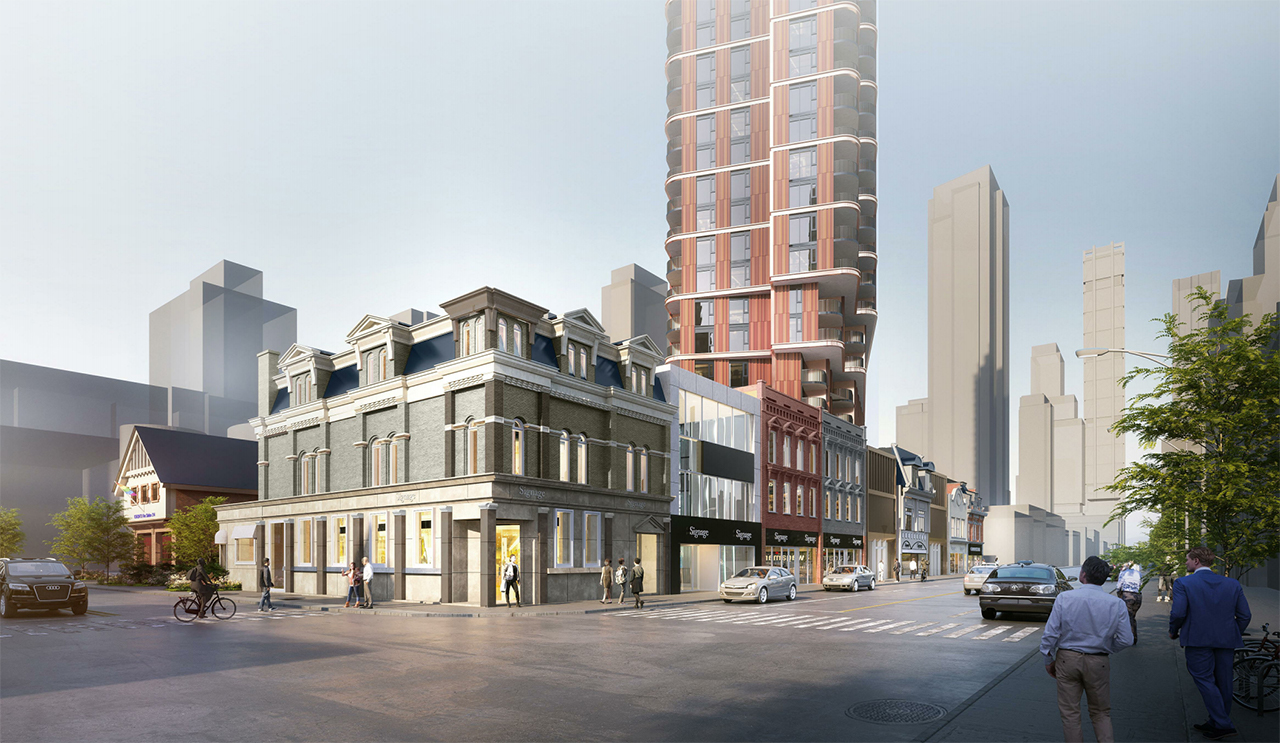 View from Yonge and Grosvenor looking northwest, image via submission to the City of Toronto

Heritage preservation is another significant part of the planning framework. The development site falls within the boundaries of the Historic Yonge Street Heritage Conservation District Plan, a plan which was appealed to the LPAT and is therefore not (yet) in force. Still, several of the properties in question are listed on the Toronto Heritage Register, and heritage conservation features prominently in the proposal. 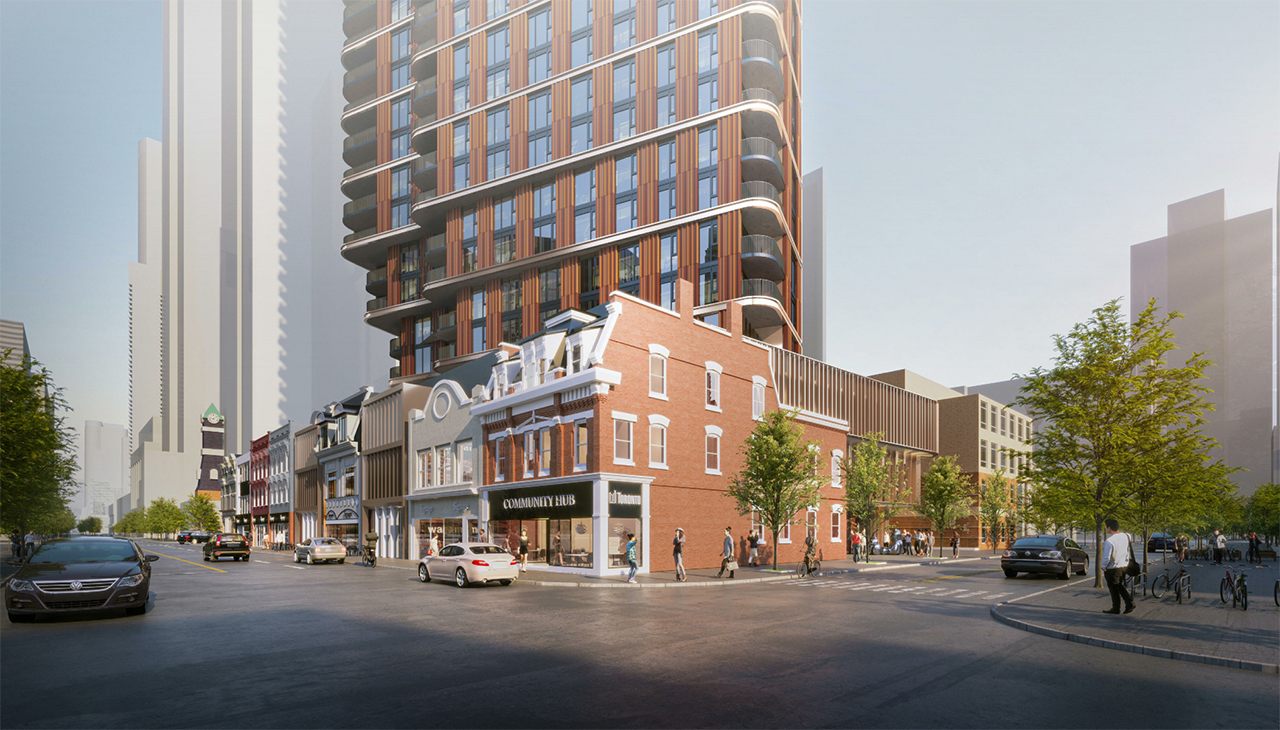 View from Yonge and Breadalbane looking southwest, featuring restored heritage facades, image via submission to the City of Toronto

Five existing small-scale commercial buildings currently make up the site’s Yonge Street frontage: three of those buildings, at 514-516, 522-524, and 526-528 Yonge, which are listed, have their facades restored and integrated into the new podium, while the other two, at 510-512 and 518-520 Yonge Street, are proposed be torn down and replaced by similarly scaled infill elements.

The Yonge Street frontage remains as retail, with the residential lobby being located on Breadalbane Street. The building will be serviced from St Luke Lane, which forms the western boundary of the site. 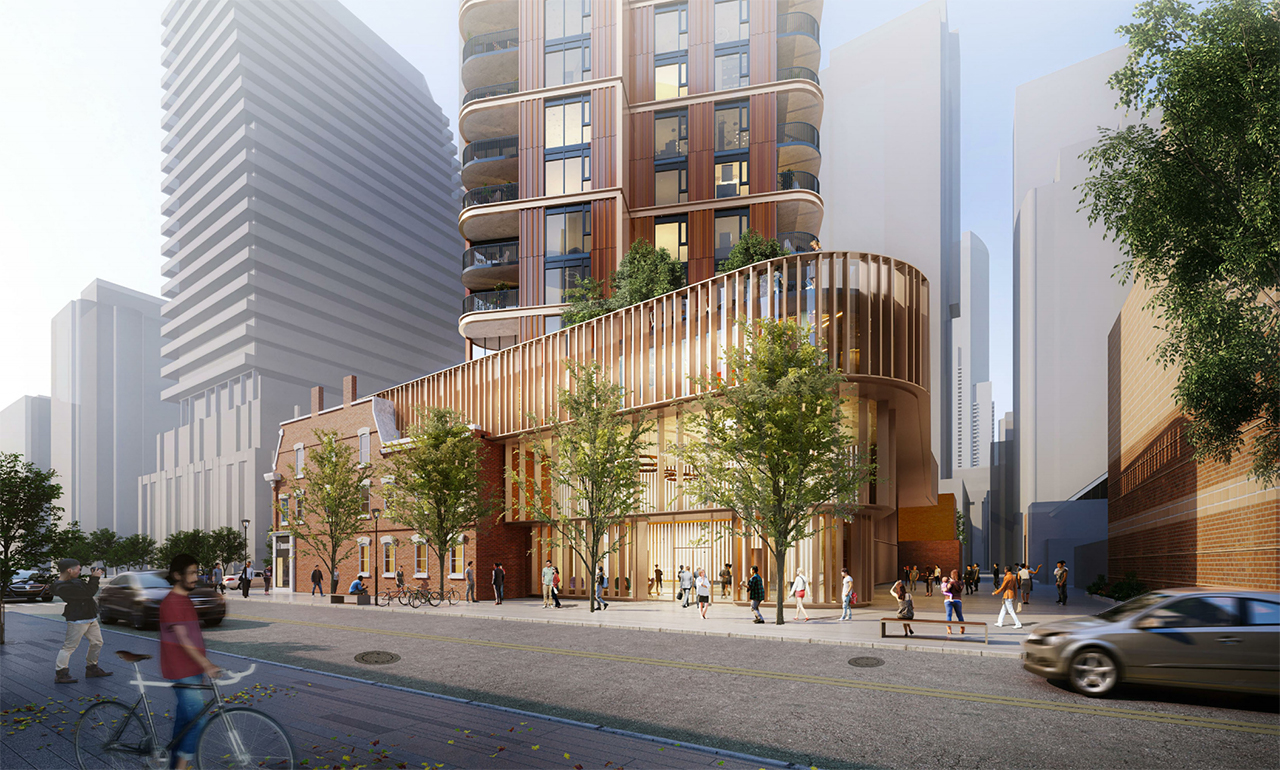 Breadalbane frontage and residential lobby, with restored heritage components incorporated into new podium, image via submission to the City of Toronto

The proposal also includes plans for an offsite park a few blocks south at 431 Yonge Street, currently a two-storey commercial building also owned by KingSett. The 415 m² park space will expand on an existing parkette that replaced the former west end of Granby Street. 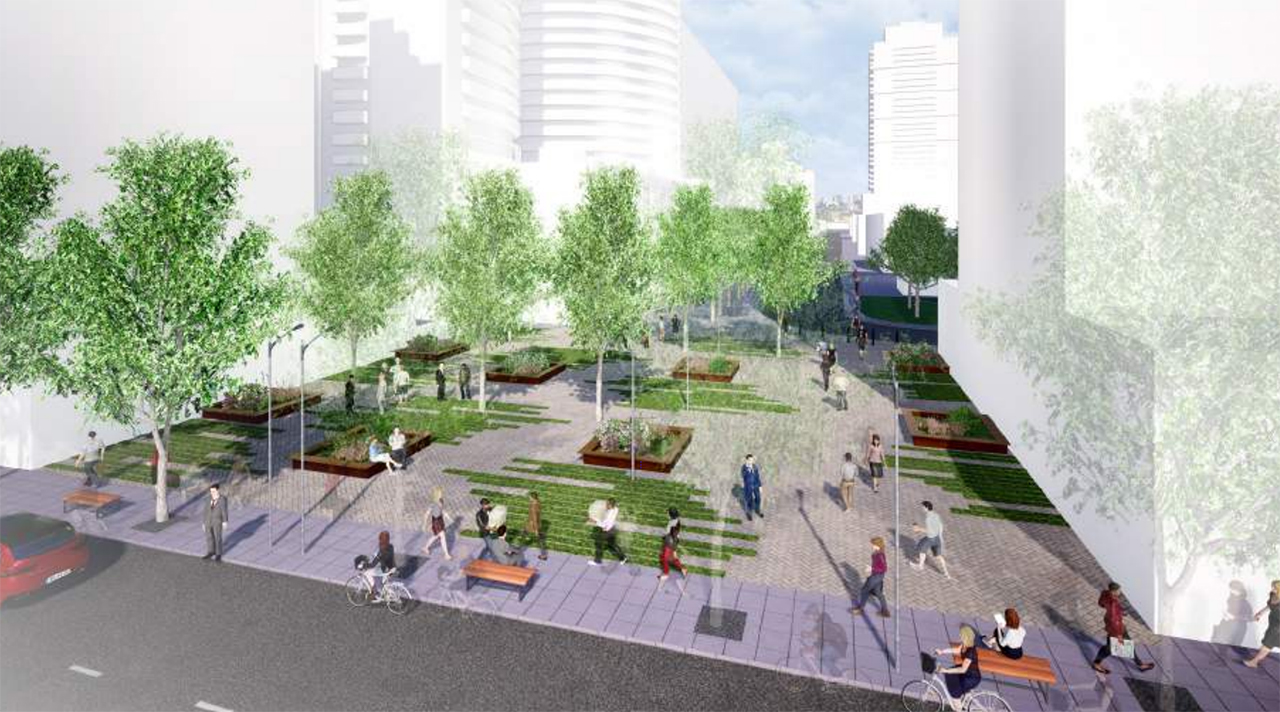 Proposed parkland dedication at 431 Yonge, image via submission to the City of Toronto 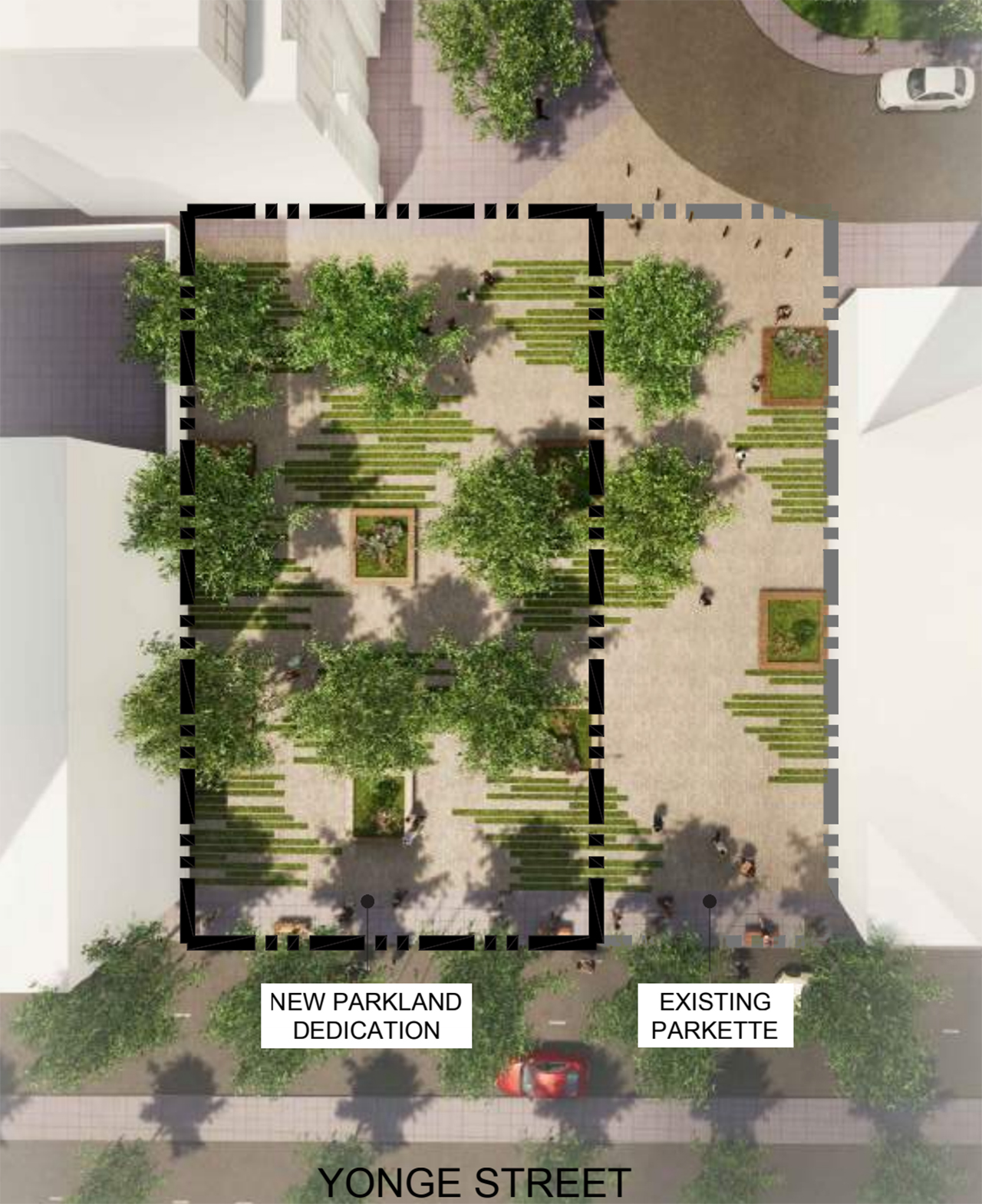 Plan of proposed parkland dedication with existing parkette on the right, image via submission to the City of Toronto

There are 94 parking spots provided in the proposal–64 for residents and 30 for visitors–as well as 500 bicycle spots.