Composed Informality: The Shaping of the Christie’s Master Plan

The former location of the Christie’s plant, long known for its aroma of cookies before it was shuttered in 2013, has provided a unique city-building opportunity for both the City and the property’s new owners, First Capital, who are planning a massive redevelopment of the site unlike anything seen in Toronto before. Sandwiched between the Gardiner Expressway, Lake Shore Boulevard, and Park Lawn Road at the heart of the Humber Bay Shores neighbourhood—itself a bit of a planning anomaly, an outcrop of towering skyscrapers in a post-industrial suburban locale—the now-vacant site at 2150 Lake Shore Boulevard West is a carte blanche for a brand new, mixed-use community overlooking Lake Ontario. 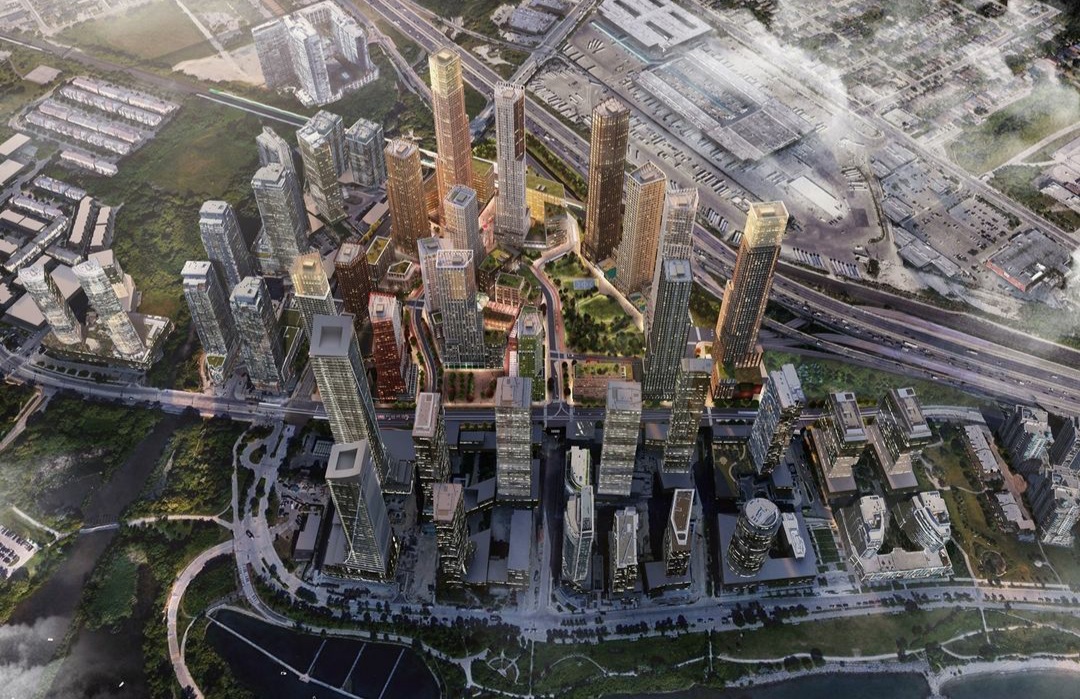 Aerial rendering, image via submission to the City of Toronto.

First Capital have seized the opportunity and are proposing a massive redevelopment that includes 15 towers ranging in height from 28 to 70 storeys; a total of 7,504 residential units; over 116,000 m² of non-residential GFA; over 38,500 m² (roughly 42% of the total site area) of open space, including a 5,000 m² central park; a covered galleria and shopping promenade; the potential for a new community centre, a library, a day care, and two new schools; and a new streetcar loop that cuts through the heart of the development. The development would also be centred around a new Park Lawn GO station at the north end of the site. 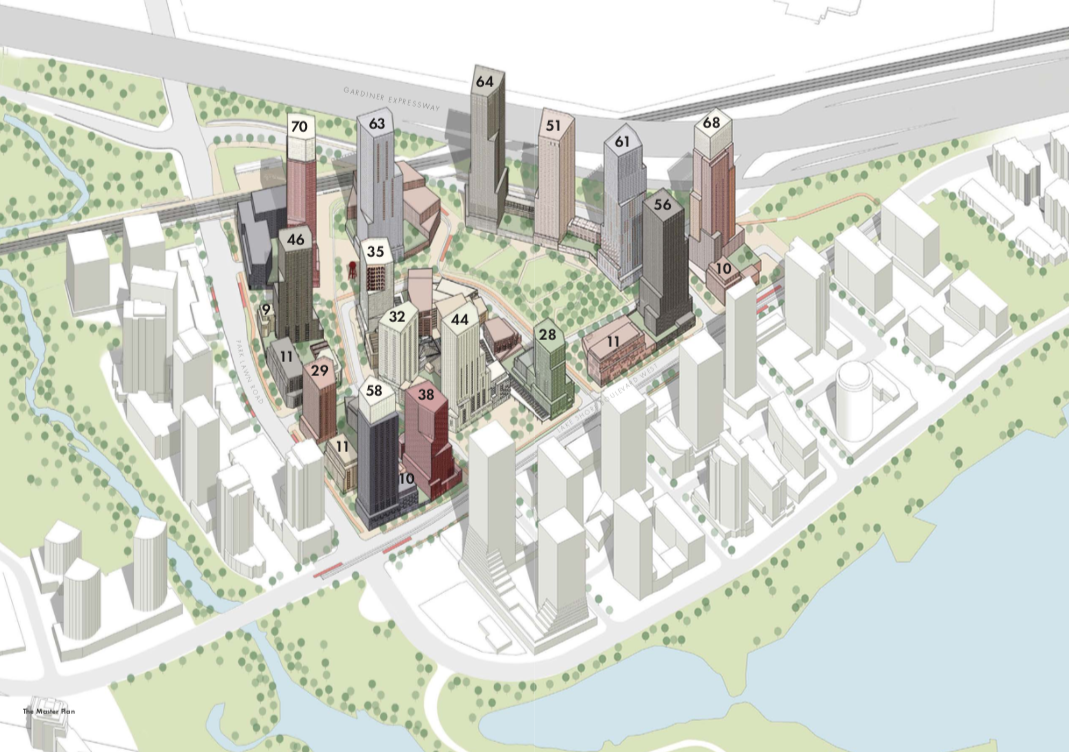 Diagram showing building heights, image via submission to the City of Toronto.

The design of the master plan is led by UK-based Allies and Morrison, alongside local firms Urban Strategies and Adamson Associates. Through its first appearance at the Toronto Design Review Panel in November, 2020 along with its most recent planning submission to the City, the design team has described its unique approach to laying out the master plan, revealing a meticulous attention to detail and a rigorous thought process that make the Christie’s master plan one of the most intriguing city-building exercises in recent memory.

It is important to note that all images presented in this article are conceptual and that the master plan is still in the early stages of design and therefore subject to change. Furthermore, the master plan has a full build-out timeline of roughly 25 years, meaning designs of individual buildings and public spaces may be altered over time. 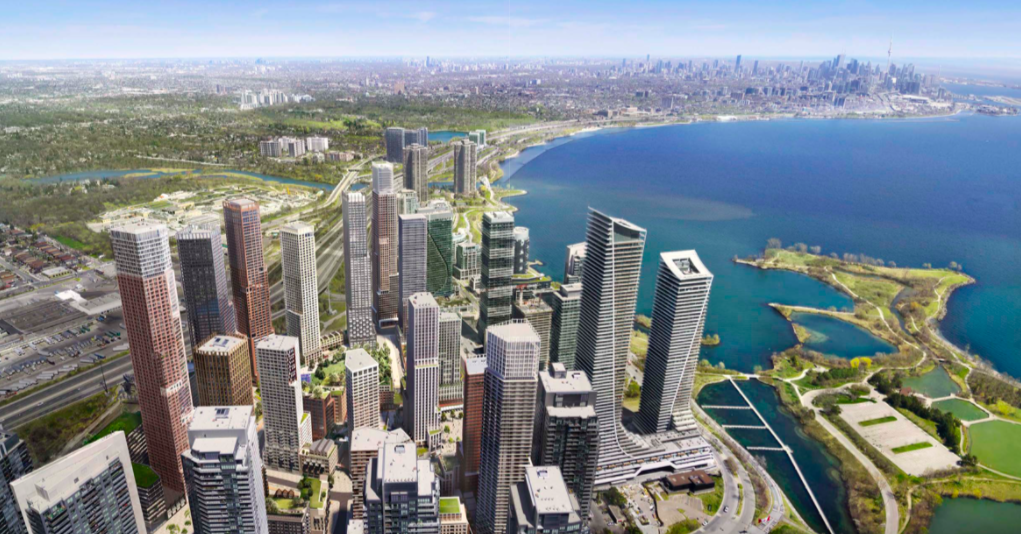 Rendering of 2150 Lake Shore looking east, image via submission to the City of Toronto.

Where does one begin laying out an entire neighbourhood on an empty site? The vision for the master plan focuses on several ‘big ideas’, which include establishing a new heart for the Humber Bay Shores area; providing a mix of uses to establish a complete neighbourhood; creating a walkable and sustainable community; and delivering high-quality architecture and urban design. While these define the overall goals and components of the project, it is the creative touch of the designers that really sets this master plan apart form others. 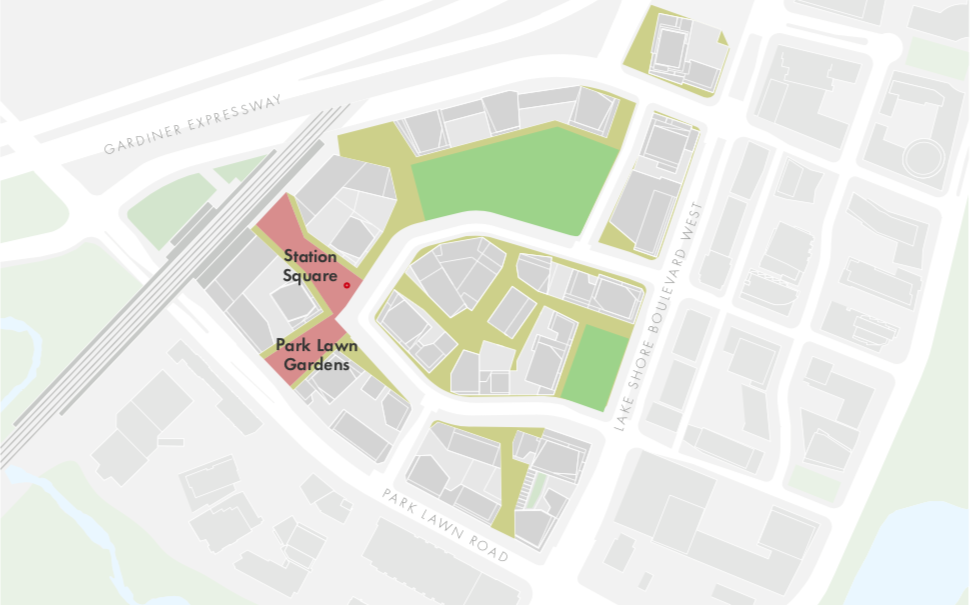 Schematic site plan, image via submission to the City of Toronto.

The design team describes their approach as ‘urban picturesque’, which they define as a series of regular pieces arranged irregularly together. Each building and public space is informally arranged and carefully composed, with consideration given to all aspects of the user experience throughout the site. Each component of the master plan is considered at different scales, and studied in relation to one another. 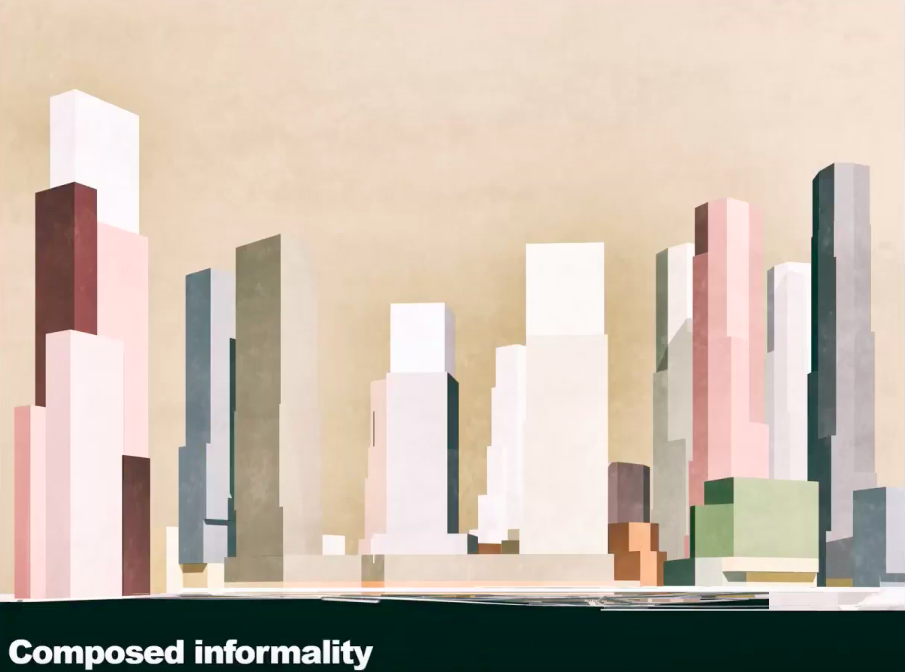 Diagram from November 2020 showing the idea of composed informality, image via submission to the City of Toronto.

To accomplish the urban picturesque, the design team began first with the public realm. The street layout does away with a traditional street grid, introducing an irregular loop through the centre of the site. A bypass road skirts the north end of the site, while a series of smaller pedestrian routes connect the inner loop to the surrounding streets. The organic, seemingly random arrangement of the streets acts as a counterpoint to the rigid grid of towers along the waterfront. 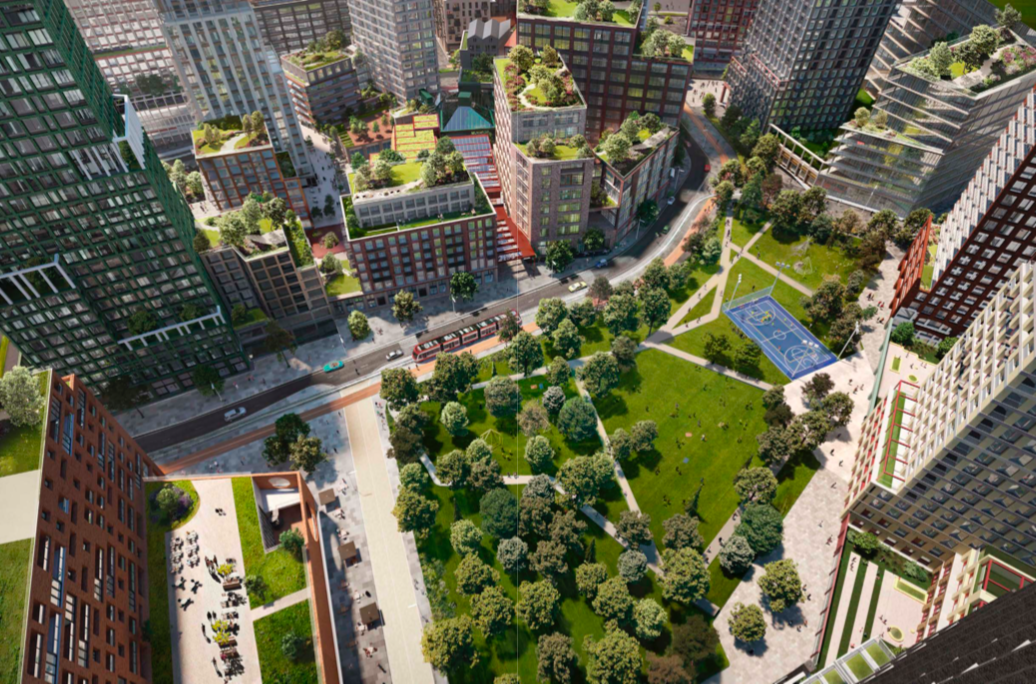 Aerial rendering of the community park, image via submission to the City of Toronto.

Building off the street grid, the design team established different scales of open spaces that contribute to the richness of the public realm. At the largest scale is the community park, the central gathering space servicing the greater Humber Bay Shores neighbourhood. A step down in scale are the squares and lanes, the smaller, more urban open spaces that serve as more local gathering spaces, situated next to the GO station and connecting the inner loop to Park Lawn and Lake Shore. 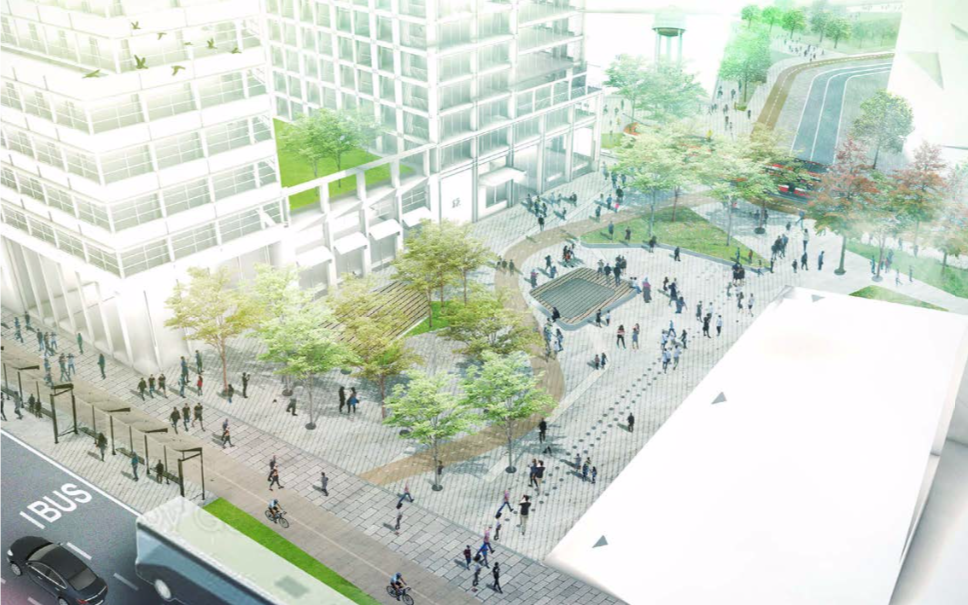 Conceptual image of the Park Lawn Square, image via submission to the City of Toronto.

A step down in scale from the squares are the largos and groves, used to enhance the public realm along the central loop road. A largo is an Italian term referring to a slight enlargement of a street or lane as it opens into a square or intersection, where the buildings angle outward to create occupiable space alongside a thoroughfare. The groves refer to patches of trees on widened parts of the sidewalk that provide areas of respite and activity along the streetscape. These add richness and animation to the roads that introduce variation in the streetwall. 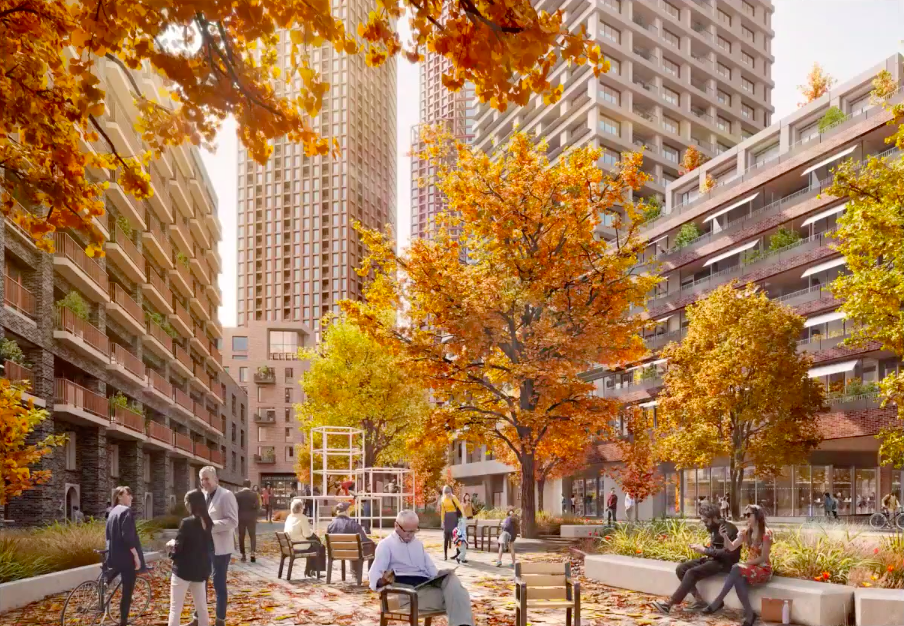 Rendering of a largo along the inner loop road, image via submission to the City of Toronto.

While each public space is specifically designed for its immediate context and scale, the design team has paid special attention to the edges of the open spaces. Through a series of studies, they have examined the appropriate scale of the buildings fronting onto each open space and focused on how each building defines the spaces between them.

Conceptual image of a new school, image via submission to the City of Toronto.

This is where the urban picturesque comes into play: each open space has been shaped and sculpted to create variety and interest in the public realm. The streets, squares, largos, and groves have been angled, shifted, and bent to create distinct spaces, while the edges have been scaled accordingly with certain buildings identified as the end view points, and others serving to frame and define the edges of the space. This skewing of the built form has created irregularly-shaped public spaces that provide a wide variety of urban conditions throughout the master plan. 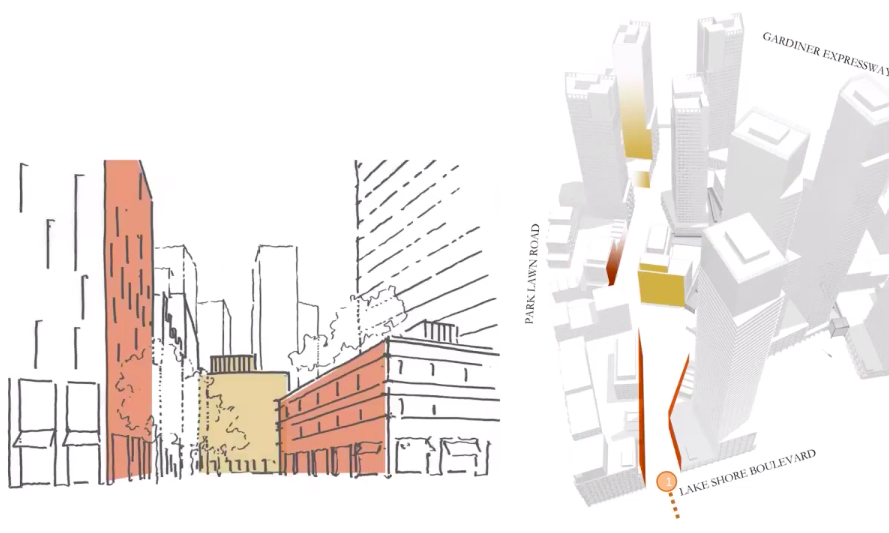 Diagram showing study of edge conditions and end view points in the public realm, image via submission to the City of Toronto.

The design team has even considered the view looking up. Using Toronto’s downtown core as a precedent, they pointed out that towers tend to frame a view of the sky and in that way help to define a space, much like Mies van der Rohe’s TD Centre. This skyward view from the ground level has informed the placement of the towers in the Christie’s master plan. 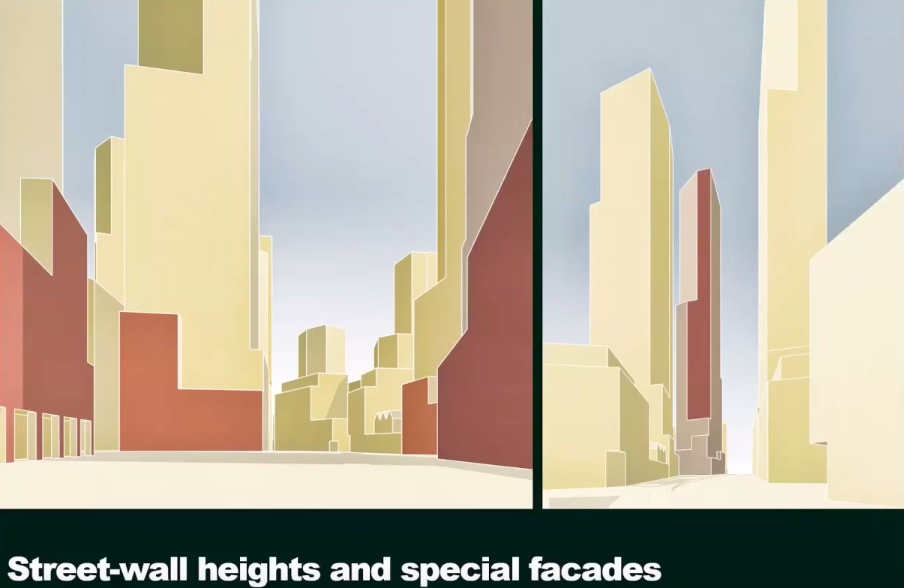 Diagram from November 2020 showing studies of streetwalls of building facades, image via submission to the City of Toronto.

Regarding the built form, the massing is being considered at three different scales. The first is the view of the buildings from the ground, how they relate to the human scale for pedestrians and how they define the public realm. The mid-range scale considers how each building relates to its neighbours above the lower levels, taking into account tower separation distances and views to and from buildings. The final long-range scale recognizes that the towers will be seen from quite far distances, and so considers the look and form of the tops of the towers, as well as their arrangement to create an interesting skyline.

Diagram showing composition of towers in relation to one another, image via submission to the City of Toronto.

While the analysis of the buildings at these various scales has informed their composition, there is one overriding factor that has largely sculpted and shaped the master plan in its current form: the local microclimate. Through extensive wind and solar studies, the design team have cut, carved, and rotated the massing throughout the master plan to minimize pedestrian wind levels and maximize sun exposure, particularly on the large community park. An illustration of an earlier wind study, shown below, shows just how successful this exercise has been, as the strong wind from the lake, funnelled between the regularly-spaced towers along the waterfront, is diffused through the irregular placement of the buildings on the Christie’s site. 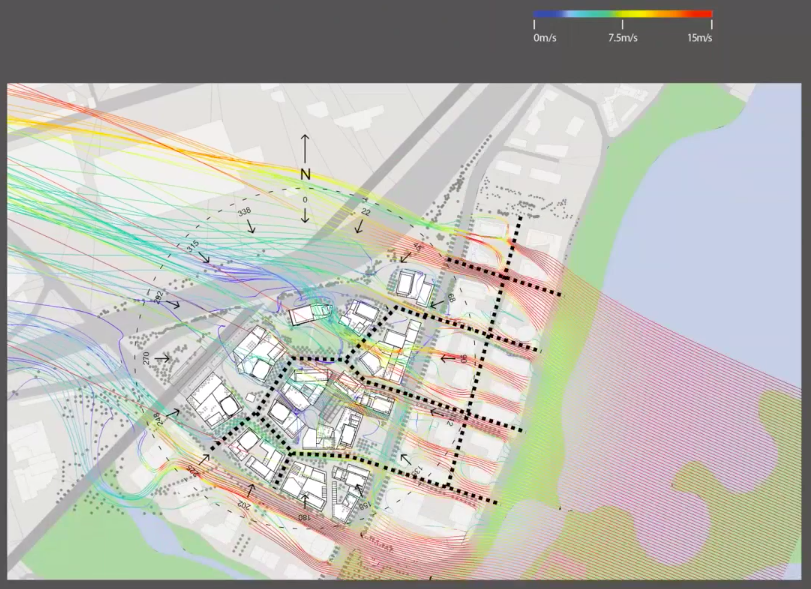 Pedestrian wind level analysis from November 2020, image via submission to the City of Toronto.

The design team is also introducing a variety of built form typologies, with a range of low-rise, mid-rise, and high-rise buildings spread throughout. They have largely done away with the tower-and-podium typology, introducing courtyard arrangements and buildings with multiple stepped-back and terraced levels, largely informed by the factors listed above. The designers boast that each building is specific to its site, driven largely by the definition of the public realm, the local microclimate, and views of the built form from both near and far. 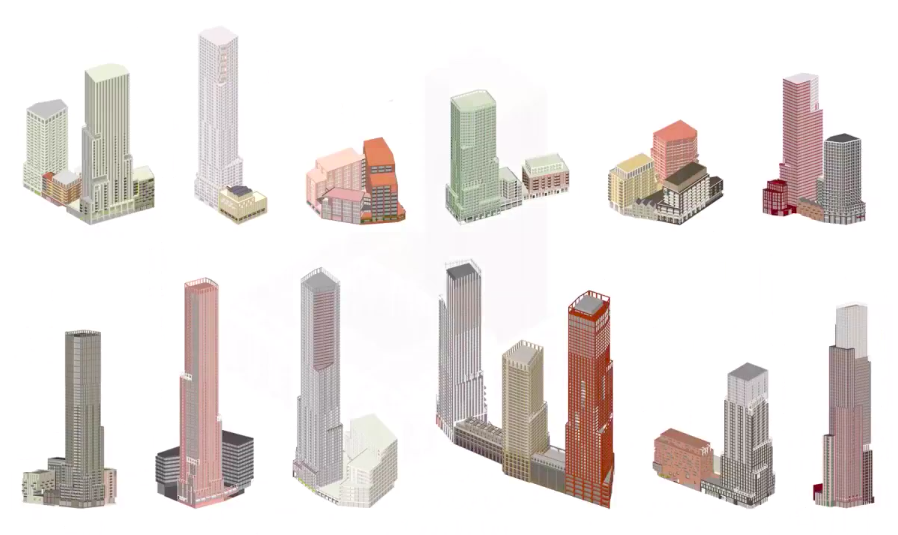 Diagram from November 2020 showing diversity of buildings, image via submission to the City of Toronto.

We would be remiss without mentioning the covered galleria, located at the centre of the loop road. Designed with the same criteria in mind as the public realm, the galleria is considered as part of a ‘dual heart’ configuration along with the community park, providing a network of covered public spaces reminiscent of market streets in Europe and Asia. Like the remainder of the public realm, the various lanes of the galleria have been shaped and sculpted by their functions, views, and microclimate. 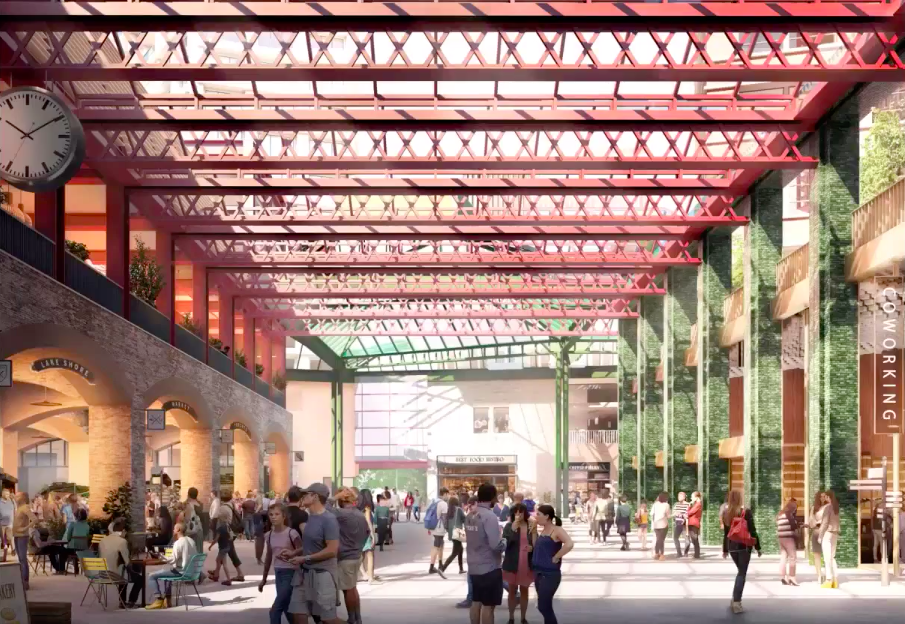 Rendering of the galleria, image via submission to the City of Toronto.

All of this combined creates a unique master plan that stands out from the crowded development pipeline full of master plans across the city. The composed informality of the Christie’s site creates a wide variety both in the built form and the public realm, with an attention to detail not typically seen this early on in the design process. The Christie’s master plan is introducing the urban picturesque to Toronto.

We will keep you updated as the redevelopment of 2150 Lake Shore continues to evolve. In the meantime, you can tell us what you think by checking out the associated Forum thread, or by leaving a comment in the space provided on this page.