A transformative multi-tower development is one step closer to its realization on Barrie’s waterfront. Developed by the team of SmartCentres REIT, under their SmartLiving banner, along with one of Canada’s largest privately-owned, full-service property management and development firms Greenwin Corp., the planned 7.8-acre Barrie Lakeshore Developments project on the edge of Kempenfelt Bay has been granted approval for its rezoning and Official Plan applications. Through the review process following the initial submission, SmartCentres and Greenwin have made a number of design changes in response to Staff and community comments.

Following the initial submission, the developers and their design team led by Turner Fleischer Architects worked with Barrie staff to revise the original proposal’s scale, massing, and tower separation. The dialogue between staff and the project team informed a refined Site Plan Approval (SPA) application, which was submitted in December, 2020, and incorporated a number of design changes and refinements. The rezoning and official plan were approved by council at a virtual meeting earlier this year, meanwhile, the SPA application advances for the project’s first phase 25-storey tower.

This transformative complex includes four towers, at 25, 35, 38, and 41 storeys, with heights ranging from 84 to 139 metres. While the towers would be known for their skyline presence, the goal for this site within the emerging Urban Growth Centre of the City, follows SmartCentres design principles to create a complete community and fulfill the growing rental demand within the area. This is reflected in the proposed mix of uses that will include purpose-built rental units, hotel suites and retail, anchored to an enhanced public realm by mixed-use bases designed to animate their street frontages and connection to natural spaces. Creating a foothold for this complex, the first phase of Barrie Lakeshore Developments is a 25-storey, mixed-use tower to be built at the east end of the site, occupying a 9,344 m² footprint fronting Lakeshore Drive. The 29,213 m² building is to contain 9,246 m² of hotel space within its podium levels, and 19,966 m² of residential space above. The 150-suite hotel is to occupy the first seven floors. Above, the residential component is to include 230 purpose-built rental units in a mix of one-, two-, and three-bedroom layouts. 73% of the units are planned with two or three bedrooms, creating new opportunities for high-rise family living in Barrie. Livability was front of mind when unit sizes and layouts were designed, including a substantial infusion of purpose-built rental units that will be managed long-term by the project’s developers. Revisions to the first plan’s architectural design include changes the materiality of the building, such as the inclusion of a lighter palette masonry at the base. Renderings included in the resubmission materials depict curtainwall glazing, while other materials are still being decided on, such as the choice between brick-patterned precast or metal panels. Clear float vision glazing is planned for the towers’ main exterior envelopes, while perforated metal balcony guards are being considered to complete the aesthetic. Special attention to detail has also been paid to the public realm design in the approved resubmission. A restaurant space has been introduced fronting public realm at the south end of the podium and a prominent colonnade supported by V-shaped columns has been added to create a striking street presence along the site’s Lakeshore Drive frontage. Adding to the community’s streetscape contributions, the plan creates new pedestrian and cycling infrastructure around Bunker’s Creek to the south of the site, with pedestrian paths that connect Lakeshore and Checkley and create new waterfront access through the development lands. These public elements are an important step in giving both complex residents and the community at large an improved relationship with the existing natural wetland and creek delta adjacent to the site. 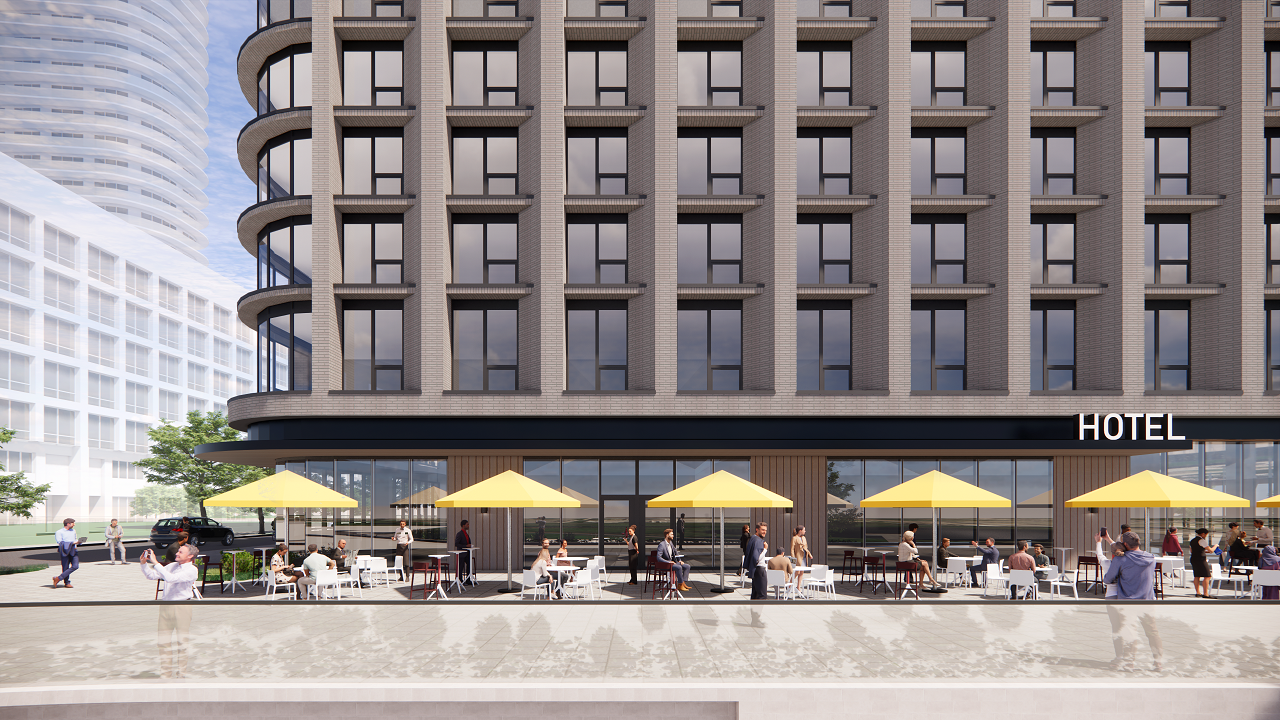 The plan to create a major new contribution to reinvigorate Barrie’s waterfront comes over a quarter-century after SmartCentres’ development of their first Walmart in Canada, also located in Barrie, part of the brand’s initial 1994 push into the Canadian market. With roots in big-box retail and now well-established in the development of urban, mixed-use projects, this is an evolution that SmartCentres boils down to the simple and effective statement “From Shopping Centres to City Centres.”

The developers are working with Staff to finalize Site Plan Approvals for the first tower and hope to break ground later this year.

Additional information and images can be found in our Database file for the project, linked below. Want to get involved in the discussion? Check out the associated Forum thread, or leave a comment below.